Transpose cells across columns into rows#

Imagine personal data with addresses in this format:

You can transpose the address information from this format into multiple rows. Go to the “Street” column and select Transpose → Transpose cells across columns into rows. From there you can select all of the five columns, starting with “Street” and ending with “Postal code,” that correspond to address information. Once you begin, you should put your project into records mode to associate the subsequent rows with “Name” as the key column. 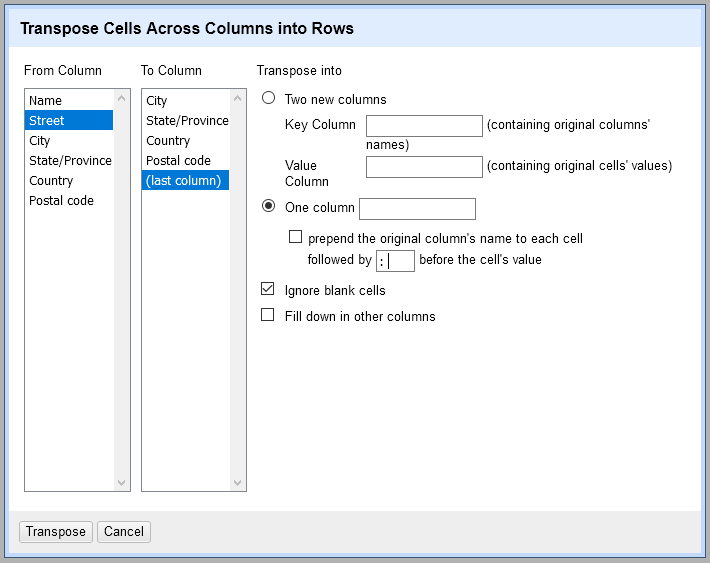 You can transpose the multiple address columns into a series of rows:

You can choose one column and include the column-name information in each cell by prepending it to the value, with or without a separator:

You can retain the column names as separate cell values, by selecting Two new columns and naming the key and value columns.

Transpose cells in rows into columns#

Imagine employee data in this format:

The goal is to sort out all of the information contained in one column into separate columns, but keep it organized by the person it represents:

From here you can use Cell editing → Replace to remove “Employee: ”, “Job title: ”, and “Office: ” if you wish, or use expressions with Edit cells → Transform... to clean out the extraneous characters:

If your dataset doesn't have a predictable number of cells per intended row, such that you cannot specify easily how many columns to create, try Columnize by key/value columns. 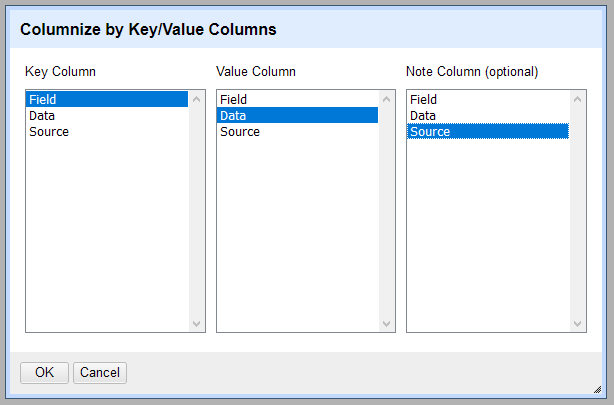 Consider the following example, with flowers, their colours, and their International Union for Conservation of Nature (IUCN) identifiers:

In this format, each flower species is described by multiple attributes on consecutive rows. The “Field” column contains the keys and the “Data” column contains the values. In the Columnize by key/value columns window you can select each of these from the available columns. It transforms the table as follows:

Entries with multiple values in the same column#

If a new row would have multiple values for a given key, then these values will be grouped on consecutive rows, to form a record structure.

For instance, flowers can have multiple colors:

This table is transformed by the Columnize operation to:

The first key encountered by the operation serves as the record key, so the “Green” value is attached to the “Galanthus nivalis” name. See the Row order section for more details about the influence of row order on the results of the operation.

In addition to the key and value columns, you can optionally add a column for notes. This can be used to store extra metadata associated to a key/value pair.

If the “Source” column is selected as the notes column, this table is transformed to:

Notes columns can therefore be used to preserve provenance or other context about a particular key/value pair.

Consider for instance the following table:

This sensitivity to order is removed if there are extra columns: in that case, the first extra column will serve as the key for the new rows.

If your dataset contains extra columns, that are not being used as the key, value, or notes columns, they can be preserved by the operation. For this to work, they must have the same value in all old rows corresponding to a new row.

In the following example, the “Field” and “Data” columns are used as key and value columns respectively, and the “Wikidata ID” column is not selected:

This will be transformed to:

This actually changes the operation: OpenRefine no longer looks for the first key (“Name”) but simply pivots all information based on the first extra column's values. Every old row with the same value gets transposed into one new row. If you have more than one extra column, they are pivoted as well but not used as the new key.

You can use Fill down to put identical values in the extra columns if you need to.